In little more than twelve months CHVRCHES have come out of nowhere to be everywhere. There’s a lot to catch up on since they posted their first song, Lies, online last May – a place in the top five of the BBC Sound of 2013, sell out headline tours in the UK and US (the most recent US tour playing to almost 20,000 people over 18 shows), a triumphant, award-winning appearance at SXSW and a string of stadium dates with Depeche Mode, to name but a few.

The excitement around that debut track was enhanced by the fact that there wasn’t so much as a photo of the band online. Who was that facelessly contorting the legacy of electronic music into surprisingly palatable new shapes? Lauren Mayberry, Iain Cook and Martin Doherty weren’t being deliberately coy – they were just hard at work capturing a sound that, in the tradition of all great musical alchemies, even surprised the band that made it.

During their recent headline tours Mayberry’s voice – a cut-glass, sci-fi soprano rounded off with warm Glaswegian tones – has developed into a formidable force. Onstage Cook and Doherty stand behind two banks of analogue synths, linked by a controller, allowing them to access one another’s machines and dovetail their bright explosions of sound. Their digital/analogue interface recalls their ’80s heroes Prince and Depeche Mode but they work with the era-spanning musical know-how of Kieran Hebden and the celebratory spirit of LCD Soundsystem.

CHVRCHES perform “Recover” on The Tonight Show with Jimmy Fallon 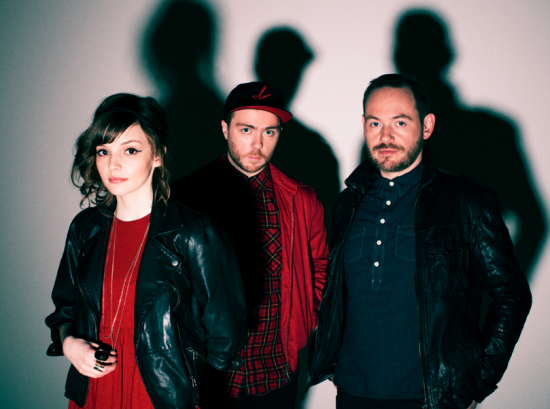